Member registration (no charge) are necessary for reference of the chromatogram and utilization of the retrieval page. 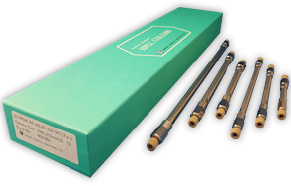 The ULTRON AF-HILIC series is HILIC mode column. These columns are modified with highly polar groups that can retain polar compounds which are difficult to retain in reversed phase mode.

ULTRON AF-HILIC-CD series is a HILIC mode column in which β-cyclodextrin (※) is chemically bonded to a silica stationary phase via a spacer. The selectivity towards molecular structure is high, and also shows high resolution analysis for structural analogues and structural isomers of acidic, basic and neutral compounds.

（※） CD has a hallow cavity derived from its cyclic structure and are hydrophobic on the inside and hydrophilic on the outside. It is characterized by the inclusion complex formation that takes with various compounds by the intermolecular force inside the cyclic structure.

Hydrophilic Interaction Chromatography (HILIC) is a separation mode used for analysis of polar compounds that are difficult to retain in reversed phase column. Polar compounds elute later than hydrophobic compound. In case of analysis of hydrophilic compounds, ion pair reagents are often used in order to retain in reversed phase columns, but in HILIC it is possible to retain and separate without using this ion pair reagent.

Comparison of Schiff base formation and anomer separation

Simultaneous analysis of sugars and sweeteners